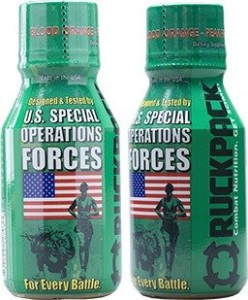 That’s right, 18:00 hours, because we’ll be jarhead-rich in the studio today.  The Garage Hour’s very own Marine In Residence, .45 Phil, will lead the way for the grunts from RuckPack, who we discovered on the set of the TV show “Shark Tank” pitching their warfighter-friendly and battlefield-tested energy supplement.  Not only did they kill the pitch, but they’re based in the Garage Hour’s hometown of San Diego, and we’re big fans of America’s fighting men and women, so we’d have done it for free – don’t tell ’em.

There’s so much we want to tell (but don’t let it distract you from gearhead radio): the big CalGuns Christmas shoot runs all afternoon Saturday (being held at Garage Hour-sponsor Active Shooter Defense School’s southern campus), and Sunday’s the favorite of every door-kicker, Lemon Grove Gun Club’s tactical shotgun run (see you there, bright and painfully early at 8:AM).

Saturdays at 6:PM for the unenlisted amongst us – it’s Hank Watson’s Garage Hour, only on 1170AM and KCBQ.com.

Yeah, the Christmas season does that.  We’re here to help: it’s Hank Watson’s Garage Hour, chock full of the upside of the holidays’ doomside on this fine Christmas Eve Eve Eve Eve.  We’ll have a full stock of cohosting madness in the studio with us, including .45 Phil, Agent Aya and Crag Maxwell.

It’ll be classic Garage Hour ricochet madness – local politics, seasonal driving, off-roading, some firepower and a truckload of reality for the lost causes on the left. 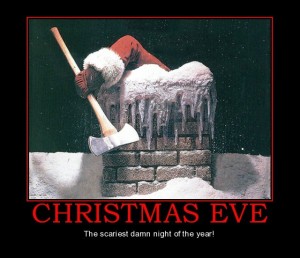 Merry freakin’ Christmas, y’all.  Yes, we’re neck-deep in it, that which normal humans call the silly season, where stockings are hung, parking is difficult and your whole house smells like pine (if you’re doing it right).  Take a deep breath, now – this moment of respite is on us. 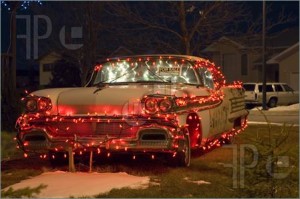 Okay, you can go back to panicking about what to buy your in-laws.

Admit it, no one really wants another scarf, and every dresser in every house is choking to death on sweaters that haven’t been worn since the first WRX hit the US.  We’re here to help! The Saturday episode of Hank Watson’s Garage Hour (12.14.13 @ 6:PM Pacific, 1170AM.KCBQ.com) will be all about the stuff that gearheads really want – cars, trucks, beers and guns – plus knowledge, function, effectiveness, and a pitcher full of bloody Marys.

In-studio for this fine festival of holiday gift giving and beverage sipping is the effervescent Agent Aya, Peter and Tyler from The 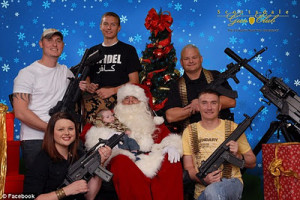 PS>  Hint: a few Garage Hour stars met a waitress in Naperville, IL last night who was buying her father-in-law a new .45.  Now that’s how to treat in-laws right.

Your Constitutionally-guaranteed freedoms are under attack. Some more. 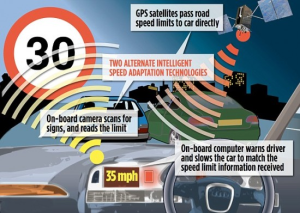 This is not James Bond, this is not fantasy BS – members of the same US government (as well as many states’ governments) that brought you Obamacare, Benghazi and the IRS want to put full-time GPS-linked tracking devices in every new car.  They want to track your car and/or truck wherever it goes. Their reason – as far as they’ll confess – is so they can bill you for every mile you drive to help pay for road maintenance and bridge repair.

Judge Napolitano at Fox did a good schtick about it in October.

1.  Aren’t we already paying gas taxes to maintain our roads? No, most local and state governments put that money in their general coffers and use it to shell out for things like underfunded pensions.

2. Mileage improvements in many vehicles (whether real or imagined) are reducing (as far as bureaucrats are concerned) the amount of money gas taxes contribute to state and local governments, which means these officials need to find other ways to get into our pockets.

Taxed Enough Already?  This reasoning doesn’t even include the more Machiavellian methodology of a growing authoritarian presidency that wants to reach into every detail of your life.  With a black box in your vehicle that communicates your whereabouts and distance driven, how soon before your passenger count, speed, style of driving or behind-the-wheel behavior becomes the government’s concern?  Forget TEA Party thinking, how about 1984?

It’s your life, and it’s about time you get pissed off that someone else wants it to be theirs.

If you’re a fan of  lowbrow art (we are – go figure), one of the progenitors of this garrishly mechanical, overtly honest, darkly bright style – David Lozeau – is hosting a one-man show Saturday, 11.23.13 at Casa Artelexia in downtown San Diego.  6:PM – 10:PM. 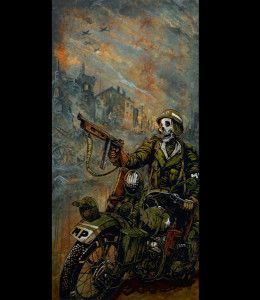 Visit Lozeau’s website. His work is engaging, whether or not you dig the look, and a grand assortment of his paintings, portraits and other bizarrities will be on hand at the gallery.  It’s also a fun spot, downtown but not too downtown, and there will be both craft beer for the sipping as well as a gourmet food truck parked at the curb.

We spent hours of the day online looking at the minor and little bits of things other people post for your acknowledgement.  But wait, there’s more – this isn’t the mindless swamp we call Farcebook (and Faceslave, Facecrack, Methbook and Crackbook; you poor addicts) nor the fetid wells of insomnia springing from a desperately overheated 24-hour news cycle, but Craigslist. 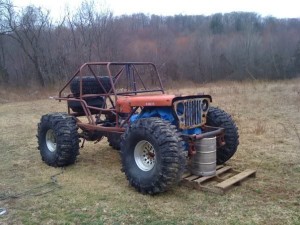 Do you mean there’s stuff on the web you actually need?  Well, need is relative – do you need new drill bits?  Sure, why not.  Do you need a car part?  Possibly.  Do you need a custard yellow 1950s range from a teardown in Kensington?  Probably not.  That said, Craigslist is a great source of near-barter human-to-human (F2F!) exchange that’s sorely lacking these days, and we embrace it (until their mysterious profit motive reveals itself…) because it’s chock-full of awesome car and truck and beer parts.  Now, if we could just get them to officially list gun parts, we’d be in business. 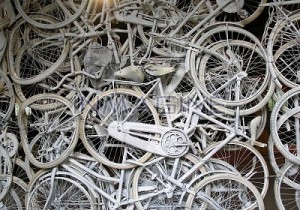 Tune in to the November 9 episode of Hank Watson’s Garage Hour for a grand assortment of how-to buy and sell on Craig’s, plus a whole bunch of don’t-dos and Craigslist secrets…  6:PM Saturdays, only on 117)AM (and simulcast on KCBQ.com). 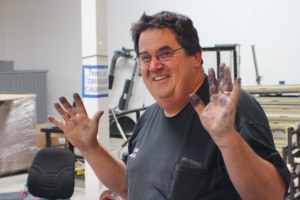 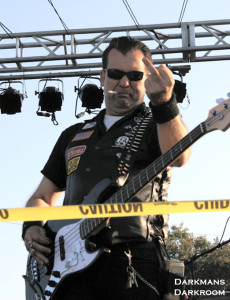 San Diego rockabilly legends (and Garage Hour royalty) Deadbolt will be opening for Rocket From the Crypt (another San Diego legend) at the House of Blues on Halloween night. You cannot miss this show (October 31) if you’re any fan of rock and/or roll, black leather jackets, big stage-eating sound or ass-kicking bands (literally – the guys from Deadbolt have been known to pick fights with their audience Rev. Heat-style).

New to rockabilly? Need a primer? Try a few Deadbolt videos (if you watch “Last Time I Saw Cole” closely, you’ll see Hostus Maximus Justin Fort in the walkthrough), or imagine the Beach Boys possessed by a drunk Black Sabbath.

Starting at 9:PM on Halloween night, the HOB SD’s Halloween show will also feature the Creepy Creeps, Mrs. Magician, Rob Crow, and Beehive & the Barracudas.  This is boot-stomping stuff, pilgrims – we’ll be there.

PS> Garage Hour fact: if you want to know what dank pit Hank Watson crawled from, ask the boys from ‘Bolt.

They don’t make ’em like this much anymore, but it appears Lake Elsinore, CA, still has the brass to run a long-course enduro through the heart of town: welcome to the 45th-annual Lake Elsinore Grand Prix (LEGP).

Whether or not you’re happy that November is right around the corner, the LEGP hits SoCal on the second weekend of the month, with an eight-mile multiple-surface natural terrain course that weaves all around the city. More than 20 classes and over 1000 racers will compete in everything from new-knees quad classes to old-guy motorcycles, side-by-sides and everything else that’s not a car.

The citizens of Lake Elsinore will turn out, too, as the city shows its motorsports stripes alongside the hordes of “hidden” celebrity racers and riders who call SoCal home.  You’ll find more details at the Lake Elsinore Grand Prix website, and you’ll find us hanging out with the mayor.

The Glock: one of the most popular handguns in the world, and one of the best handguns for new shooters. Have questions? Want answers? The guys at Wilde Built Tactical in La Mesa are doing a Garage Hour-inspired social event at their shop for interested entry-level Glock and handgun consumers this Saturday, October 19 at 11:AM.  Join us. 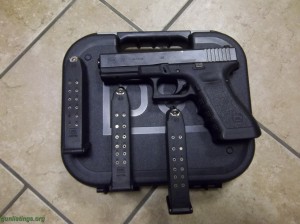 If any of these questions have rattled around in your head, the Glock Party will be your kind of time: What does this do? How do I care for a Glock? 9mm? .40 S&W? .45ACP?  What’s a bullet? Can my wife/husband shoot it? What do I do to purchase a Glock (or any firearm) in California? Why are there different colors? Is this legal? How do I store a Glock? Can I take it apart? Where can I go to shoot?

Members of the Garage Hour crew will be there too, with munchies, a few Garage Hour fans and, if we’re lucky, prizes.  This is all about becoming comfortable with your first handgun, and the Glock is a great place to start. See you at 11:AM.